Sounds implausible, doesn’t it? Of all the tall tales of lost treasures, this one seems the most far-fetched, but surprisingly, it might be true. For nearly two centuries, Native Americans, Spanish explorers, and treasure hunters of every sort have reported seeing a shipwreck in the desert somewhere near The Springs at Borrego RV Resort.

The ship has been variously described as a Viking longboat with a carved snake prow and shields mounted on its sides, a Spanish caravel carrying pearls, and a small ferry boat. Unsurprisingly, when the ‘finders’ tried to return to claim their loot, the ship could never be found. 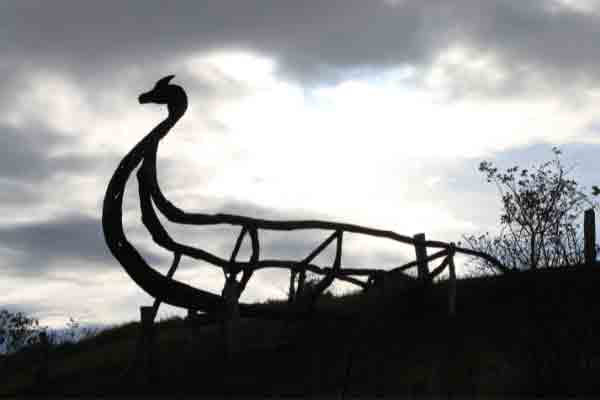 Claims for the shipwreck’s existence have been made for nearly every place in the desert, but the most convincing locale is the area around the Salton Sea.

The desert sink we call the Salton Sea was once known to ancient people as Lake Cahuilla. It was a freshwater lake five times the size of the modern sea and was fed by the Colorado River. Because of the natural meandering of the Colorado, Lake Cahuilla had dried up by the time Spanish explorer Juan Bautista de Anza arrived in 1774. He heard the legends of the strange Viking shipwreck in the desert seen more than a century prior.

Another story he heard was of a lost pearl-ship, which adds believability to these tales. According to Spanish records, in the year 1612, the building of three caravels was commissioned in Acapulco to harvest pearls off the coast of Mexico. These shallow-draft ships had square sails and rows of 13 oars.

Evidence of a Shipwreck in the Desert

Books and newspaper articles have reported this regularly for years. Some of the more credible claims include…

Probably the most significant visible evidence of the lost pearl ship is a petroglyph scratched on a boulder in nearby Pinto Canyon that depicts a square-mast ship with rows of oars.

Will You Discover the Shipwreck in the Desert?

It’s only 32 miles from Borrego Springs to the shores of the Salton Sea. Get in your car and head east on the Borrego Salton Sea Way. Perhaps on the day you decide to go exploring for a shipwreck in the desert, a mighty wind will blow away centuries of sand to reveal the masts of the Viking ship, the caravel, or even the ferry. Or maybe not.

Find Out For Yourself!

Reserve your stay at The Springs at Borrego RV Resort and Golf Course.