October is the month for three fascinating celestial events in the skies above The Springs at Borrego RV Resort and Golf Course. Plan ahead for a star party – stargaze under the only International Dark Sky in California. The darkness makes the sky show all the more distinctive.

Those streaks of bright light we sometimes see in the night sky are meteors. Meteors are space rocks (or meteoroids if they are really small) that burn up as they fall to Earth because of the drag of our atmosphere, leaving a glowing tail of hot air and dust behind. When many space rocks zip through our atmosphere at once, we call it a Meteor Shower. 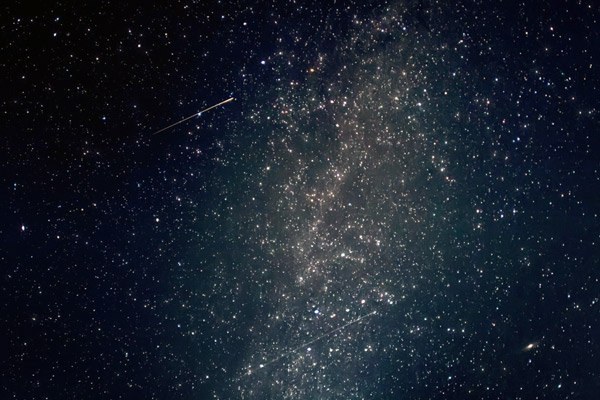 The Birth of Meteors

Meteors are spawned by comets during their elliptical orbits around the sun. As a comet gets closer to the sun, some of its icy surface boils off, releasing particles of dust and rock. This comet debris gets strewn along the comet’s path, especially in the inner solar system (that’s us), where the sun’s heat continues to boil off more ice and debris. Then, several times a year, as the Earth makes its trip around the sun, our orbit crosses the orbit of a comet…and all the dust and rock trailing behind.

When to View Meteor Showers

The best date and time for the Draconids is early evening, Oct. 7th. Draco the Dragon is now spitting out meteors, also known as shooting stars. This is one shower that’s best to watch at nightfall or early evening, not after midnight. No matter where you are on Earth, watch as close to nightfall as possible. The shower is active Oct. 6th – 10th.

The best date and time for the Orionids is late night or the wee hours of the morning, Oct. 20th – 22nd. The Orionid Shower is a by-product of Halley’s Comet. In 2020 the Orionids will peak on the night of Oct. 20th, with rates of about 10-20 meteors per hour. The moon won’t interfere because it will be in a crescent phase (about 23% full) and will dip below the horizon before the shower starts up.

Your Star Party at The Springs at Borrego

Our October weather is usually no cooler than 62ᵒ at night, so you’ll be comfortable with a light jacket or sweater. Just lie back with a blanket and a thermos and let yourself relax without trying to pinpoint any particular spot in the sky. Be patient! The number of shooting stars is not predictable. You may see one every few minutes, or, like the rare outbursts of Draconid activity in 1933 and 1946, you may be treated to a storm of thousands of shooting stars per hour.

Request Your October Stay for Starry Nights at the Springs at Borrego RV Resort and Golf Course. Reserve Now!